President Donald Trump released a statement in response to a report from the New York Times that bemoaned the fact that conservatives are making election integrity a central part of their platform, and are raising money as a result, due to the credible accusations of widespread voter fraud that plagued the 2020 election.

“The New York Times did a story today saying that various Republican groups, many of them outstanding, are rallying on false claims that conservative activists are finding that the best way to raise money and keep voters engaged is to make Donald J. Trump’s biggest fabrication, Election Fraud, their top priority,” wrote President Trump.

“Sadly, the Election was Rigged, and without even going into detail, of which there is much, totally game changing.”

“Democrats could not get Republican Legislatures in Swing States to approve many of the voting changes which took place before the Election, which is mandated under the Constitution of the United States,” the 45th president added. “For that reason alone, we had an Illegitimate Election.”

“The Supreme Court and other Courts were afraid to rule, they were “gutless,” and will go down in history as such.” President Trump concluded, “No wonder so much money is being raised on this issue, and law-abiding people have every right to do so!”

As the President has been banned from virtually every social media site, and is reportedly being blocked by his advisors from joining alternative sites Gab, Parler, and Spreely, he released the statement via email via the Save America PAC. 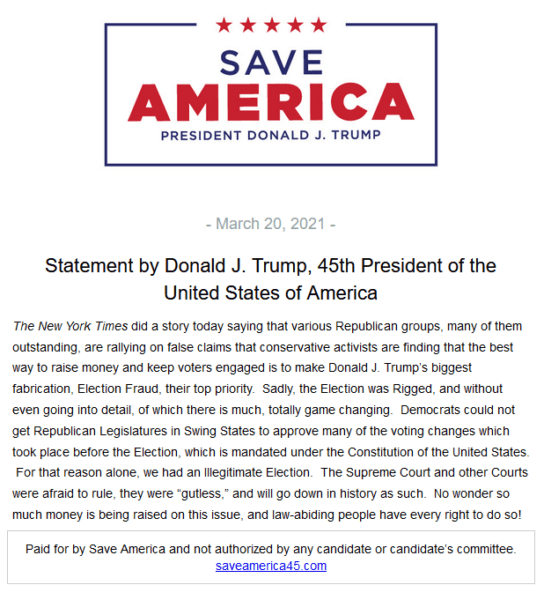