Hunter Biden Reportedly Had Ties With Different Countries Around The World, Far Beyond China, Ukraine

Hunter Biden and his business partners were involved in discussions about possible deals in dozens of foreign countries, often corrupt backwaters, at times invoking official channels like ambassadors, emails reviewed by The Daily Wire show.

While most attention has focused on Ukraine, where a gas company paid the now-president’s son tens of thousands of dollars a month while he was in deep crack addiction, and China, Hunter and his partners at a consultancy called Rosemont Seneca were eager to do business in a vast array of other places.

The map below highlights the countries where deals were discussed or executed, according to a Daily Wire review of emails obtained from the laptop Hunter Biden reportedly left at a repair shop in Delaware and never paid for or picked up. Below is a sample of some of those dealings. 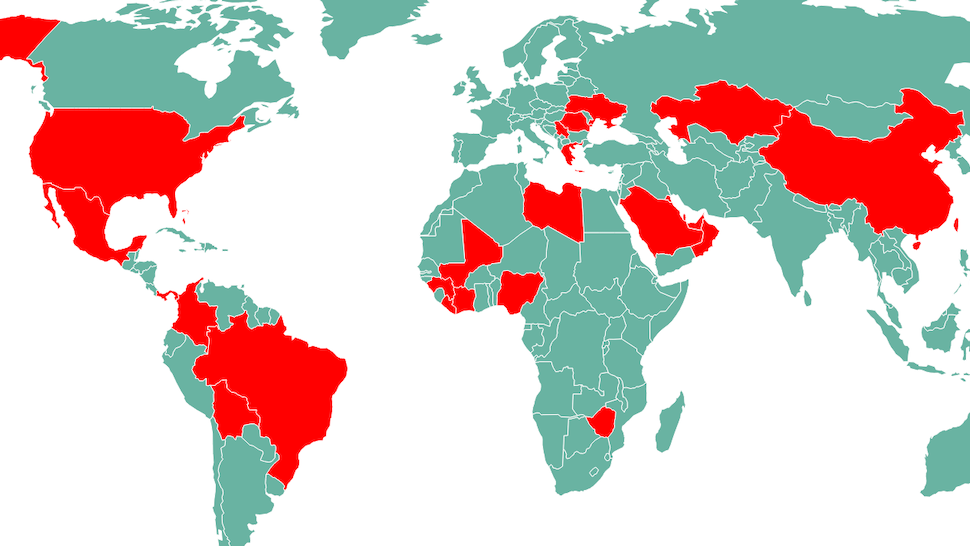 In 2015, Joe Biden’s brother Jim wrote to Hunter about the prospect of a payout for serving as a middleman in an “oil deal” with Carlos Slim, Mexico’s richest man:

“Have a very real deal with Pemex (Carlos slim) need financing literally for a few days to a week. Have the seller (refinery /slims) and buyer major being delivered from pipeline in ( h/ USA)   Nothing is simple but this comes very close.  As always the devil is in the detail!  Any interest on the long skirts part?…  Hang in there hunt !! You can and will hold it together. I’m very proud of you and have the greatest respect, you are a great, sweet and incredibly strong man. I know you pal!!!”

In February 2016, Hunter wrote to Miguel Aleman Magnani, a Mexican billionaire and son of a former Mexican governor, that he had set up a meeting for “Carlos” and Aleman Magnani’s father:

“I haven’t heard from you since I got you a mtg for Carlos and your Dad. We have been talking about business deals and partnerships for 7 years. And I really appreciate you letting me stay at your resort villa…but I have brought every single person you have ever asked me to bring to the F’ing WHite House  and the Vice President’s house and the inauguration and then you go completely silent.”

Slim also owned TracFone Wireless, in 2015 the largest corporate beneficiary of the fraud-ridden federal benefits program popularly known as “Obamaphones.” The U.S. government paid Slim’s company $9 per phone line for a service that it sold to the public for $7.

In 2014, Hunter permitted an American ex-con and Romanians to use the Biden name to add weight to a bid to buy a Greek railroad.

David C. Wittig wrote Hunter in December 2014: “I met with Yiorgos Nikitiades, the ex-Minister of Tourism…  Yiorgos’s view is that a call from the Ambassador in Athens will go along way in getting us this deal. Give this some thought.”

The prospective buyer was a partnership that including Romanians. Later that month, Wittig added: “Hunter, The Romanians are rightfully asking that you do not object to having you name appear in the letter (I sent to you yesterday) that informally discusses the consortium.”

Hunter replied, “I have no objection and I am in fact comfortable with you using my name in connection with this project. Obviously we have many details to iron out before we finalize any proposal, but I am very interested participating in the project. ”

In February 2015, Wittig wrote Hunter: “I met with the bankers for the government on Monday of this week. Everything is moving forward, although we still have not ironed out the structure … hence the trip to Romania. We should have a good idea how things look on Monday. You might start thinking about a trip in March.”

Wittig was a Wall Street banker who posed for the cover of Fortune magazine holding a cigar in 1986 and became head of a Kansas utility firm in 1995. In Kansas, he bought a $230,000 Ferrari and allegedly used a corporate airplane for family vacations, spent $6 million renovating the mansion where he lived, believing the company would cover the cost, and spent $6.5 million upgrading his executive suite while the company laid off hundreds of workers.

In 2005, Wittig was convicted on 39 counts of conspiracy, wire fraud, money laundering, and circumventing internal controls. In 2007, the convictions were overturned, and hours after a new, Barack Obama-appointed U.S. attorney was sworn in in 2010, the prosecutor’s office announced it would not seek to retry him, citing a recent Supreme Court ruling affecting white-collar crime statutes.

Wittig ultimately received a $36 million settlement from the utility company and moved to Greece, where he held a stake in a company called Euroconsultants.

He also served time for a separate fraud case for which he was convicted in 2004.

In 2015, Hunter was working on a “matter related to Romania” for a client. “Two approaches that I think would be most effective are one, visiting with the Romanian Ambassador to the U.S. and two, reaching out to our State Dept. on an information only basis,” he wrote.

In 2018, a man named Bill McManus wrote to Hunter “regarding potential gold mine opportunities in Zimbabwe. The long and short of it is a long time friend’s uncle has been mining for gold in Zimbabwe” and believes, with investments, he could assemble claims of “up to 2 million ounces of gold.”

Additionally, though the government required state ownership of diamond mines, “we have a friend who has the right to desilt 160 miles of the Odzi river… This is interesting because the primary purpose is to desilt the river. Thus, apparently this is not technically a diamond mine that requires any type of government ownership. The gentleman has indicated he would like to sell or create a jv as he is struggling with access to capital.”

Hunter asked to talk on the phone and forwarded information about it to Joe Biden’s brother, Jim.