Democratic Michigan Rep. Rashida Tlaib retweeted, then later apparently deleted a tweet that contained an anti-Semitic slogan calling for the end of the State of Israel.

“From the river to the sea, Palestine will be free,” read the caption from user @RashaMK. One of the women illustrated is holding up a fist while the other holds up a peace sign. 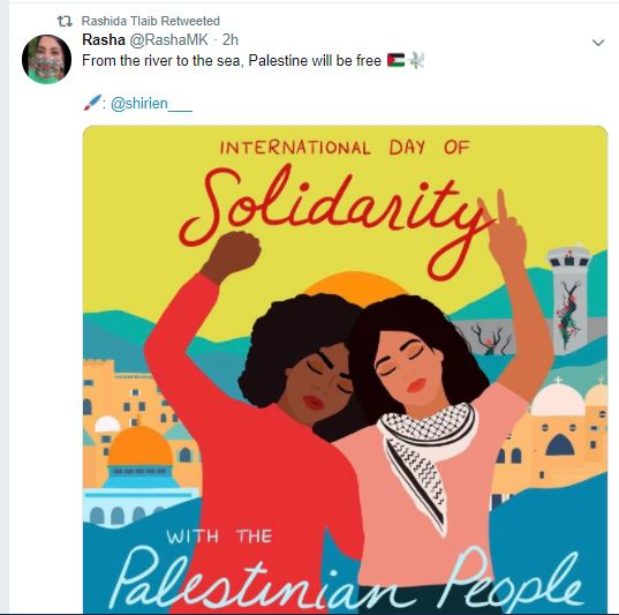 According to the New York Post, which first reported the news on Tuesday, the slogan “first rose to prominence as the slogan of the Palestine Liberation Organization during its founding in 1964. It refers to the notion that the land between the Jordan River and the Mediterranean Sea should be entirely under Arab control, with a Jewish state eliminated.

Tlaib, known for making inflammatory statements about Israel, was a featured speaker last December at a Chicago conference featuring several anti-Semitic voices and organized by American Muslims for Palestine (AMP).

She is an open supporter of the so-called Boycott, Divestment and Sanctions (BDS) movement, an effort to, according to the congresswoman, “boycott the racist policies of the government and state of Israel.”

While she removed the retweet, Tlaib did use the image in a tweet that remains on her profile.

Thinking of my sity Muftieh and family in Palestine today. From Detroit to Gaza, we will always fight against oppression and inequality.

This is an excerpt from The Daily Caller.