Former President Trump is asking his supporters to help fund his new “Trump Force One” private plane just days after a jet flying him to Mar-a-Lago made an emergency landing when one of its engines failed.

Trump, through his Save America PAC, sent his supporters an email titled “Update Trump Force One” in which he said that “my team is building a BRAND NEW Trump Force One.”

He added that the construction of this plane has been under wraps and said “I can’t wait to unveil it for everyone to see.”

The fundraising email said he had “a very important update on his plane” and asked potential donors if they remember how the former president used to travel across the U.S. in his own “Trump Force One” before he became “the greatest President of all time.” 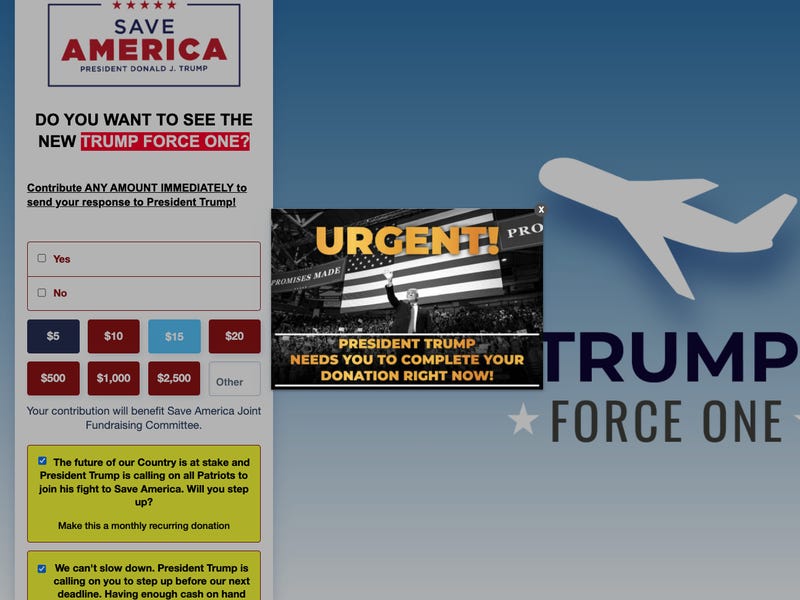 The screenshot above was obtained by Business Insider.

The email included a GIF of a plane taking off with a poll giving donors “yes” or “no” options if they wanted to see his new plane.

Advertisements
The poll links to a donation page that asks supporters to “Contribute ANY AMOUNT IMMEDIATELY to send your response to President Trump!”

The former president was traveling back to his Mar-a-Lago residence in Palm Beach, Fla., from the Four Seasons Hotel in New Orleans in a private jet when the pilot decided to turn around and return to the airport after an engine failed. The news was first reported by Politico and The Washington Post.

The jet, a Dassault Falcon 900, was given to Trump by a donor for the evening to travel back from the Republican National Committee retreat in New Orleans to his home in Florida.

UPDATE: Former President Trump on Monday said he is not using any campaign funding to construct a new plane.

In a phone interview, Trump took issue with an article by The Hill over the weekend that cited a fundraising email his political action committee recently sent out.

“The story was incorrect,” Trump told The Hill. “I already have a plane, the same one I used on the 2016 campaign.”

This is an excerpt from The Hill.